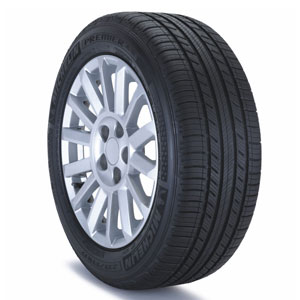 Michelin® Premier™ A/S Tread Depth
With the introduction of the Michelin® Premier™ A/S this month, there has been considerable
amount of positive comments from various mainstream and social media sources related to the
impressive safety performance of a worn Premier™ A/S tire stopping shorter than leading competitor’s
brand new tires*. However, there also has been some negative comments generated related to the tread
depth of the Premier A/S being much shallower and implying Michelin is hiding this fact which aids the
safety performance but generates less tread life mileage.
Thus the purpose of this bulletin is provide detailed information to dispel these perceptions and
call attention to the specific facts surrounding the total performance of the Premier™ A/S.
We need to begin and emphasize Michelin Total Performance and what it means by marking it
on the sidewall of Premier™ A/S. By using the Michelin Total Performance marking, Michelin has
committed in the design of the tire to bring multiple performances together in the key areas of safety,
longevity and fuel savings without compromising any one performance to achieve the others.
Specifically this means:
 Safety: In our launch campaign we have clearly communicated and focused the superior
safety performance of Premier™ A/S specifically in wet braking vs leading competitors*.
 Longevity: The Premier™ A/S carries the same limited tread wear kilometer warranty as the
product it replaces at 100,000 km. There is not sacrifice of tread life with Premier™ A/S
even at less tread depth (8.5/32’).
 Fuel Savings: The Premier™ A/S has a slight improvement in rolling resistance maintaining
fuel consumption capability (Green X even though not marked) compared to the product in
replaces.
All of the safety performance becomes possible with the EverGrip™ Technology that
features a high traction tread compound and tread grooves that evolve during tread life.
Additionally Premier™ A/S makes use of Intellisipe® Technology that was introduced with the
Defender™ in 2012. This technology is a significant advancement in 3-dimensional siping that
provides tread element rigidity that maintains the Premier™ A/S tread life equal to the Primacy™
MXV4®.
Finally the reduced tread depth is consistent with Michelin’s attention to reducing greenhouse
gases and carbon footprint with reduced rolling resistance.
TECHNICAL BULLETIN
Therefore in summary, the argument of Premier™ A/S being at less tread depth (8.5/32’)
generating an inferior tread life product is not valid. For more information about the performance of the
Premier™ A/S tire visit: www.michelin.ca/premier.
*Based on internal wet braking test results from 60 and 80 km/h versus Goodyear® Assurance® TripleTred™ A/S tires in sizes 235/55R17 (99H) and
P215/60R16 (94V), Bridgestone® Turanza™ Serenity Plus in size 215/60R16 (95V); using MICHELIN® Premier™ A/S tires in sizes
235/55R17(99H) and 215/60R16 (95V) buffed to 5/32″of tread. Actual on-road results may vary
Michelin